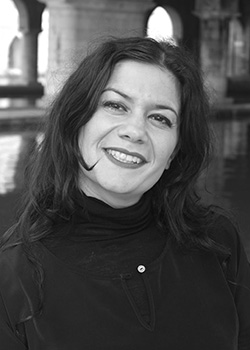 Town centre regeneration outcomes are evidence of the success of Architect led design team and early stage public engagement. She is an advocate for place-making measures to promote people re-inhabiting the streets of the Irish towns that are under depopulation and economical pressure too often generated by ill considered out-of-town retail development and traffic focus road design.

Her recent urban regeneration schemes include the award winning “Clonakilty 400 Urban design master-plan” (Ph1& Ph2) and “Thomas Davis Square”, Mallow. In the last two years Giulia has collaborated with the Office of Public Works and Transport Infrastructure Ireland (the funding agents of infrastructure projects like national roads and flood defence schemes), where she implements an architectural design approach aiming to deliver “multi-functional use infrastructure” for public amenity and community outcomes.

Giulia is an active member of the Academy of Urbanism and Cost Action researcher- people friendly cities, in a data-rich world- where she has researched on the Italian historical town of Lucca and contributed to the launch of the European Charter on “Collaborative Urban Development”.